Ultra-light touring: 500 miles through New England on a 150

I've been riding since the 60s, owned a lot of motorcycles and scooters and covered a lot of ground. Now I'm        pushing 70 and arthritis is into my back, my elbows and aching my knuckles. I want to keep on riding, so I        stepped down to what is fast becoming my favorite bike... a 150cc maxi scooter made in China by Jonway. It's        ultra-light weight; it gets nearly 90 miles per gallon and it cost me only 1,400 dollars.

Most of the time, even riding the biggest bikes, we ride local. We run errands, do short day trips, just        enjoy riding around. On many of the nation's interstates, especially the urban ones, a 150cc bike would be        almost a stationary target, but what about the more scenic back roads? So I mapped out a 500 mile trip that        started in New Hampshire and wound its way through Vermont, ran up New York state along Lake Champlain, then        looped back through Vermont and back to the starting point in New Hampshire. Would the bike hold up? Would        my bony backside?

One of the advantages of a lightweight bike is it's easy to roll onto a utility trailer. If a stretch of        urban (and tedious) landscape separates you from where you want to ride, you can trailer the interstate in        comfort, unload where you want to be, and begin the scootering part where you want to. That's what I did,        visiting cousins and leaving car and trainer in their driveway.

The first day it rained non-stop until early afternoon, so as it cleared, I made an easy 50 mile run through        scenic New Hampshire, gassed up and got ready to depart the next day. Departing from Keene, NH on day two, I        rode straight through Vermont up woodsy route 30 and turned North only after I'd gotten into New York. NY        route 22 runs right along lake Champlain and includes points of interest like colonial Fort Ticonderoga and        farther up the lake, the spectacular Au Sable Chasm.

While my family sweltered on Cape Cod in 94 degrees, here it was in the high 50s and gorgeous. From Au Sable        Chasm, I rode to Port  Kent for a ferry ride across the lake to Burlington, Vermont.  Still        feeling good, I continued to Montpelier where I stayed the night. Distance traveled: 300 miles.  Eleven        hours on the road.  The most distance I'd ever made before on a single day was 360 miles... on a bigger        bike when I was younger. 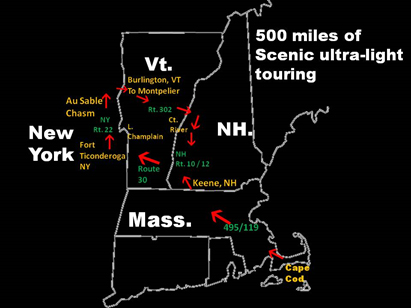 What did I learn?

The riding position - feet forward, butt wedged snugly against a raised lumbar support - is good for the long        haul. This position gives you the same comfort highway pegs mounted on a big motorcycle's crash bars offer.        At the age of 67, I put in an 11 hour, 300 mile day. You can't ask much more of a bike than that at any        price.

On rural roads, expect bumps. On scooters with smaller wheels than motorcycles, the worst of        these can be harsh. Mostly, I found good to adequate surfaces, but there were stretches in such bad repair,        I learned to "post" by pushing off with my feet, which lifted my rear end off the seat and partway up the        lumbar support.

If you map out a rural tour in advance, expect miles driven to exceed miles indicated on your map.  The roads are windy in real life.        When I rode a CFMOTO 250cc motorcycle 2,500 miles through 7 northwestern states, the trip was 300 miles        longer than I expected. On New England back roads, winding through the hills, you'll need to add 20% to        what's on the map.

For driving like this, 150 CCs is perfectly suited to the task. I was at, or slightly above, the        posted speed limits and except in a little stretch between Keene and Brattleboro at rush hour, moved easily        with traffic. And I wasn't driving at full throttle except up hills. On the longest grades, my speed dropped        into the low 40s... even the high 30s... but on hills like that, you'll find a climbing lane for trucks.        Motorists can pass you safely if they have to. After 500 miles, my total gas bill seems to have been around        21 dollars.

If you go online, you'll hear occasional denunciations that Chinese scooters are all crap. This hasn't been        my experience. You do need a professional for servicing, preferably familiar with the simple GY6 engine        Chinese scooters use. All motor vehicles need competent servicing. Having said that, my Jonway scooter ran like a champ the whole way.        You can't ask more than happy riding hour after hour - even for an 11 hour day. And I ran it pretty hard.

With an automatic (CVT) transmission, the tachometer is more important than the speedometer. A        150cc GY6 engine is only putting out eight horsepower... maybe eight and a half. No engine will hold up well        if it's run wide open continually, including yours. So I made it a point to hold my RPMs between 5-6        thousand. Running down a long grade, the engine doesn't care if you're passing the speedometer's red line so        long as engine RPMs are kept reasonable. What that meant in practice was that I was cruising along at 50        miles per hour, hour after hour, and the bike was happy.

With good storage under the seat, a big top-case trunk, and the hard saddle bags I mounted, I had voluminous storage space - better than all but the most expensive touring motorcycles.        I have a duffle bag I've always used for motorcycle trips. Didn't need it with my new rig. My camera and        some other stuff, each slid into a foam-rubber sleeve, lived in the glove compartment. Unmarked police        shirts purchased cheaply online have nice expandable chest pockets... wallet goes into one; cell phone in        the other. Nothing in your back pocket to pop out underway or jam into your sciatic nerve hour after hour.

You have greater security from theft. I'm not referring to the security alarm some Chinese bikes        come with. I don't like those; they drain the battery. So I leave mine stuffed in my sock drawer. I'm        referring to the opportunity posed to a thief by a bunch of bikes parked outside a rural motel at 3:00 in        the morning. The scooter has its front wheel locked over and it's hard to see where you'd get a firm grip to        lift it into a truck without breaking something. Besides, a Jonway scooter like mine costs a tenth of what        the motorcycle several doors down costs. If you're willing to risk becoming a felon, you'll be stealing a        Harley. There's your security.

I'm getting more pleasure per dollar spent with my Jonway scooter than with maybe any bike I've owned. The        closest competitor was a Honda 250cc REFLEX scooter I owned years ago... identical physical layout to the        Jonway I'm riding now. Everything about the bike is so easy. Parts, when I eventually need some, are        inexpensive and the whole bike cost only $1,400. Best of all, I now know I can plan some trips with it and        both the bike and I will hold up well. What more could I ask?